Vellore to Varkala Cabs and Vans

Karthi Travels® has had its presence in chauffeur-driven car rental sector for more than 30 years. We continuously strive to ensure that we provide reliable, quality and timely cab services. We have wide range of car options right from sedans to hatchbacks and Vans.

Avail Vellore to Varkala car hire and van hire services at Karthi Travels® and enjoy a great trip with family and friends.

Make the best use of the services offered by Karthi Travels® at the best rates & experience the relaxing and trouble free journey by hiring Vellore Varkala or Katpadi Varkala taxi at Karthi Travels®. With over a decade of experience in car and van rental services, Karthi Travels® is the best cab service provider in the industry, if you are planning to book a taxi.

We also launch few offers during certain seasons and holidays. We try to provide you excellent deals from time to time to help you travel in the cheapest possible fares. With our user-friendly website, you can book taxi online in a few simple steps and avail hassle free car and van rental service. Travel from Vellore to Varkala with Karthi Travels® and have a pleasant journey.

At Karthi Travels® Car and Van Rentals, you will get many options of car types and travellers to choose for hiring a taxi from Vellore to Varkala. Some of the popular car models include Indica, Etios, Innova, Traveller and many others. The table below highlights the various car model options available which you can choose for Vellore to Varkala cab booking.


With our well-mannered drivers and great fares, we promise you a wonderful journey. For any further details on Vellore to Varkala car and Van rental, please call us on +919655502002.

At Karthi Travels® you get the best deals for your Vellore to Varkala cab tour. The cab tour at Karthi Travels® is sure to be affordable for you. You can avail the tour depending on the itinerary available.

The details corresponding to the toursopted will be available to you once you make the booking. Karthi Travels®’s services are also available for local and outstation travel. You can book outstation cabs and vans and travel to popular destination of your choice and interest.

We pride ourselves on transparency. With no hidden charges, great cab service at very affordable rates, we offer you the best prices as compared to any other player in the industry. Karthi Travels® believes in making travel extremely convenient for customers and we fully understand that the Vellore to Varkala cab fare is an important parameter when you make the decision to book a taxi.

Your Vellore to Varkala taxi fare will never be a burden on your pocket. You can contact us on +919655502002 for any enquiry or to get more details on Vellore to Varkala cab fare. We will also help you plan your trip in the most efficient way possible.

1. Affordability: Karthi Travels® is the best car and Van rental provider in Vellore, if you are looking for an affordable taxi fare from Vellore to Varkala.
2. Courteous Drivers: We promise to provide you reliable taxi service with our professional drivers.
3. Timely Availability: Karthi Travels® always guarantees timely availability of taxi service.
4. Services across Vellore: With excellent services for cabs from Vellore to Varkala Karthi Travels®'s operation is available across all major towns in and around Vellore.
5. Wide Range of Cars: You can choose a taxi or Van from a wide range of cars and Vans like Indica, Tavera Sedan and Traveller.

Karthi Travels®’s continuous focus on complying with customer demands and travel needs have positioned us as a true customer-centric player in the road travel/tourism sector. In order to make customers outstation travel truly memorable, we offer several Vellore to Varkala cab and Van tours. Our website is continuously updated with the new seasonal toursthat are launched. You can also call us to explore the various tours from Vellore to Varkala. After choosing any of these toursfrom Vellore to Varkala, you can be assured that you are getting the most efficient rates, the most courteous and experienced drivers as well as Karthi Travels®’s guaranteed service levels. Customers are provided with options for one way, single day as well as multi-day car and Van toursfrom Vellore to Varkala.

Varkala is the only place in southern Kerala where cliffs are found adjacent to the Arabian Sea. These Cenozoic sedimentary formation cliffs are a unique geological feature on the otherwise flat Kerala coast, and is known among geologists as Varkala Formation and a geological monument as declared by the Geological Survey of India. There are numerous water spouts and spas on the sides of these cliffs. In 2015, Ministry of Mines, Government of India and Geological Survey of India (GSI) have declared Varkala Cliff as a geo-heritage site. Varkala is under Varkala police jurisdiction. 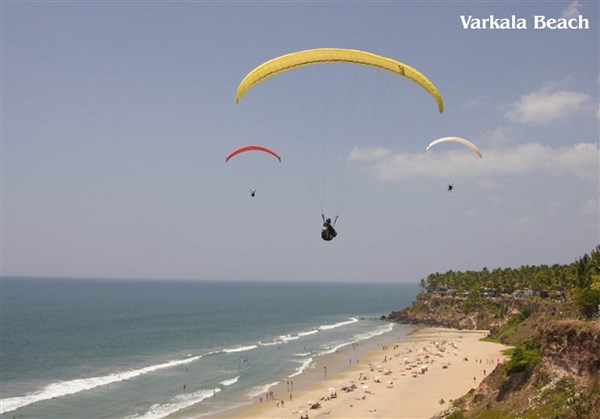 About Varkala Beach
Varkala Beach or Papanasam beach is a haven for sun-bathing and swimming. It is one of the most popular tourism destination in Kerala. The evening views of the sunset are worth lingering over. The cliff and the beach houses a lot of resorts, restaurants and other shops. The cliff has a long stretch of small shops which goes on for over a kilometer. The black part of the sand on the Varkala Beach contains Thorium-oxide which is a radioactive substance. Thorium and Thorium-oxide and its isotopes are found all over Kerala and can be identified by its black colour. About Kappil Lake
Kappil Lake is about 4 kilometers (2.5 mi) north of Varkala Town. This serene estuary meanders through dense coconut groves before merging into the Arabian Sea. The bridge over the lake is quite a vantage point to view the backwater stretching white and grey to the distant blue horizon. Boating is another great way to browse this tranquil waterway. About Anjengo Fort
Anjengo Fort is a fort near Varkala. It is a place of historic importance as well as beautiful natural setting, Anjengo is an ideal destination for those who don't mind walking around and explore what is in store. The historic significance tagged to Anjengo comes through foreign powers like the Portuguese, the Dutch and finally the English East India Company. In the year 1684, the English East India Company chose Anjengo to establish their first trade settlement in Kerala. At Anjengo, one can find the remnants of the old English Fort, which was targeted several times by other foreign powers, who were at that time fighting each other to get a firm footing in Kerala. The Fort is now under the protection of National Heritage Monuments. There is also a cemetery inside the fort, which most probably would be having the remains of the occupants of the fort, and the oldest among the burial sites dates to 1704. The beautiful Muthalapuzhi lake is situated in Anjengo. 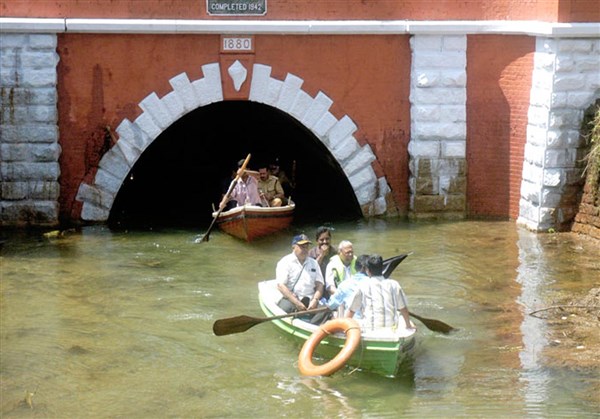 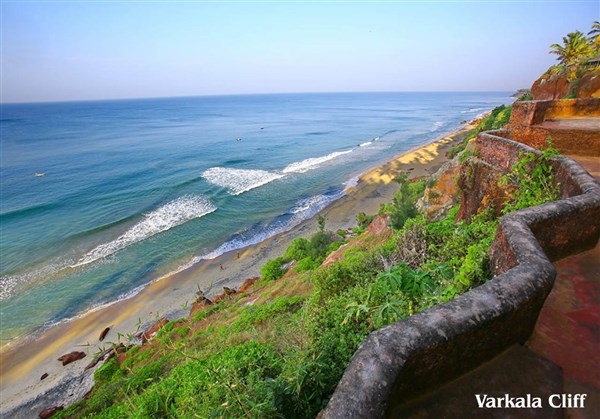