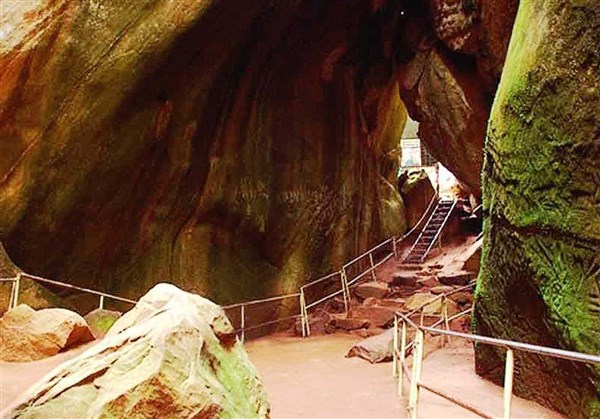 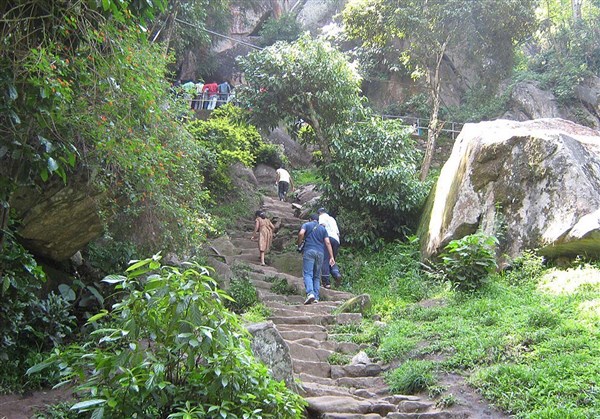 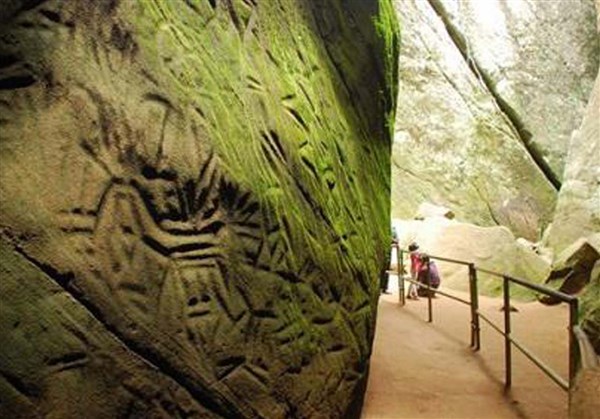 Famous for its exquisite rock and wall carvings, the pre-historic Edakkal Caves are two naturally occurring alcoves located in the Wayanad district of Kerala. The caves measure at a massive length and width of 96 and 22 feet respectively and lie 1200 metres above the sea level. Owing to its precarious location, one needs to trek for one and half hour (around 4000 ft) to hit the cave entrance, and another 45 minutes to reach the mouth of the cave. The Edakkal caves are of historical and archaeological significance as it has carvings that date back to the Neolithic era, the late Stone Age. The stonework in the interior of the cave is estimated to be as old as 5000 BC to 1000 BC.

Edikkal literally means 'a stone in between' and aptly describes its formation. A smaller rock has wedged in between 2 bigger ones to form a natural cave. In the truest sense of the word, it is not a cave but a natural fissure in the rock which has a heavy boulder on top. The cave thus has 2 levels. The first level of the cave can be explored through a small opening. Just opposite this is a passage that leads to another opening, this time in the roof. Here you come to the second level which is much bigger in size. To explore the caves visitors have to pass uneven boulders, an iron ladder and rock walls covered with fungi. The walls are covered with carvings of animal and human figures, some of which are hazy but are clear for the most part. The clarity of the carvings is even more surprising given the duration they have survived.

There is three type of petroglyphs or rock carvings in the cave with oldest believed to be 8000 years old. This suggests inhabitation of the cave at several points in history. The carvings include weird shaped figures (animal, human or otherwise), squares, stars, crosses, wheels, triangles, spirals, tridents, plant and pot motifs. The human figures have masked faces and raised hair. There are ancient inscriptions as well with some pointing to a Tamil Brahmi script. Recently, historians and archaeologist have speculated that there is a link to the Indus Valley civilisation as they have found a carving of "a man with a jar cup", one of the most distinct motifs of the Indus Valley civilisation (2300 BC to 1700 BC).

The verdant landscape of Wayanad coupled with the daunting pathways up to the main destination makes Edakkal caves the perfect destination for a little trekking adventure. The trek here is concrete but can be quite steep, so make sure that you take your time as you make your way up. After trekking for about 30 minutes, you will reach the ticket counter from where you need to buy the tickets for your onward journey. Stone stairways that pass through several smaller caves have been built up to the Edakkal Caves, and the surrounding natural beauty of the region is mesmerising indeed. As you continue on your way, the trek gets steeper, but proper arrangements and barricades are in place to ensure smooth movement. One can also reach the midway by jeeps arranged by DTPC.

November - March is the best time to enjoy the pristine natural beauty and enigmatic petroglyphs of this destination.

Fred Fawcett in 1890 discovered Edakkal Caves. He was on a hunting trip when he came across a stone axe in a coffee estate that was used by a Neolithic Celt. Fred had a deep-rooted interest in pre-History and wanted to explore more. He crossed the thick forests of Ambukuthy Mala to discover what later proved to be a dwelling dating back to the New Stone Age which was inhabited several times in the course of human history. The rock carvings here are of at least three distinct types, with the oldest one dating back to a period as long as 8,000 years ago.

Places to visit in Wayanad